Our New Fins Are Here! 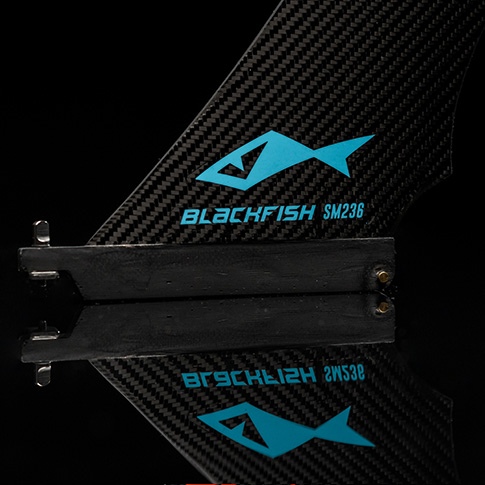 We are pumped to introduce our new range of high-performance SUP fins designed with our World Class SUP athletes.

Our three exciting fins - LD241, AC213 and SM236 - are handcrafted using the same process as used for building our paddles featuring 100% BioResin construction.

“So the idea for the fins actually stems from the Summer of 2019. Sam McCullough came over from Perth to do a local race and join the Blackfish team in Hood River for the Gorge Paddle Challenge,” said David Smart, Founder of Blackfish Paddles. “One afternoon I found Sam McCullough and my son Will sitting by the side of the road with their heads down, clearly working on something of interest. Turns out they had decided to reshape an existing fin and were using a combination of cement curbing and sandpaper to make the modifications. More teenage enthusiasm than composite engineering!

The enthusiasm was contagious and Sam clearly had an idea of what the fin should look like and so soon after we decided that making a line of fins, designed by our athletes, would be a good addition to our product range.

We approached Sam, Amandine and Lincoln and they came back with three very different ideas and so we set about to build prototypes and test them. Right around this time COVID-19 arrived and a process that should have taken 4 to 6 months took much much longer than expected.

It was worth the wait and so today we have three unique fin shapes, that have been designed by world class athletes and that are built using the same process and materials as our paddle blades. The result is a stiff, light weight high performance fin. And as always no plastic or bubble wrap! The fins come in a durable carry case to protect the fin and the environment.”

The SM236 fin is designed to be fast and fun downwind. It provides just enough tracking with just enough looseness to make riders enjoy their sessions as they connect the bumps – Just as effortlessly as Sam does!

“My involvement with my fin design started off with an email from David regarding me designing a fin for my race boards. I had two fins that I swore by and have always used while racing and training. I knew how they could be improved with a few tweaks. I thought this would be an awesome opportunity to design a perfect do it all fin,” said Blackfish Team Rider, Sam McCullough. “I got to the drawing boards and drew up countless designs until I found this one. I’ve been testing this fin for nearly a year now and it does everything you would want out of an all-round racing SUP fin.

It holds a nice line on the flat water and when downwinding it allows me to turn rapidly from left to right connecting runners and at the same time keeping stability from the fins depth. Also the rake in the fin is to release sea weed that is a problem in my local conditions.

In technical racing when on a wave you have plenty of control going down the face. Coming up to a turn you can just put your back foot on top of it and pivot straight around the buoys. I have used this fin already in the Stand Up Surf shop King of the Cut and finished with a first place in the open 14ft category.”

The AC213 fin has been developed to excel at course racing and Battle of the Paddle style races where manoeuvrability and buoy turns are key to a solid race.

“Even after hundreds of trainings and races with my Blackfish Paddles, I am still impressed with the weight, the feeling of the blade in the water and the quality of this gear! It was therefore natural for me to support Blackfish in developing new products as good as their paddles,” commented Blackfish Team Rider, Amandine Chazot.

“On the ocean, I love to let my board to just go, glide from bumps to bumps without any resistance. That’s why I have developed a special fin for that with Blackfish. High enough to bring stability to the board, but pretty thin to be smooth on the bumps.

Furthermore, this fin is also my favourite one on flat water. Low drag, really low resistance, hyper light, if you know how to paddle straight, this is the best fin ever on flatwater too. And the last advantage, but not least, this fin is made in bio resin as all the Blackfish Paddles range.”

The LD241 fin has been designed to excel at time trial and longer distance flat water events providing high-level of glide and tracking.

“Blackfish and I set out to create a versatile high performance fin that would work in a range of conditions and boards. We haven’t reinvented the wheel so to speak, instead by incorporating traditional hydrodynamic principles we have a fin that feels incredibly stable, tracks well all while having a reduction in drag resistance,” commented Blackfish Team Rider, Lincoln Dews. “Being able to utilise Blackfish’s innovative manufacturing techniques allowed for a ultra-lightweight fin that can cope with some serious on-water abuse!”

All Blackfish fins come in a protective carry pouch with a quick release screw. As with all Blackfish products, there is no plastic nor bubble wrap involved in the shipping process.